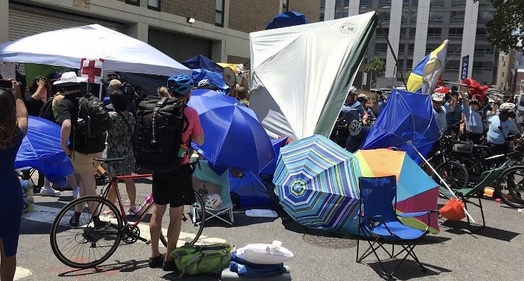 Yesterday the ICE encampment was aggressively and abruptly dismantled by counter-terrorism/DHS and PPD officers. Several were arrested. The experience for many was traumatic, seeing their hard work destroyed in a matter of minutes. That evening, on the ruins of the camp, a general assembly was gathered, giving voice to various orgs and participants. Many spoke about the victory of making it as long as we did, as well as the need for a diversity of tactics. Most decided it was not tactically wise to stay at that location, and the space was given up within hours.

Two dozen or so, independent of the original coalition, decided to trek out to City Hall after the assembly and focus their energies on confronting the mayor and city officials with the original occupation’s demands, as well as educating the public about Philadelphia’s Preliminary Arraignment Reporting System (PARS).

The PARS contract allows ICE to access Philadelphia’s database of arrests with the intention of ridding our city of “criminal aliens” – though the Mayor’s office’s definition of criminal aliens includes those with minor offenses such as loitering and traffic violations. That being said, Philly’s police are cooperating and working with ICE and yet Mayor Kenney claims that this is a sanctuary city. This a lie.

The contract is up for review in August, and now is the time for there to be pressure on Kenney to not renew this contract. 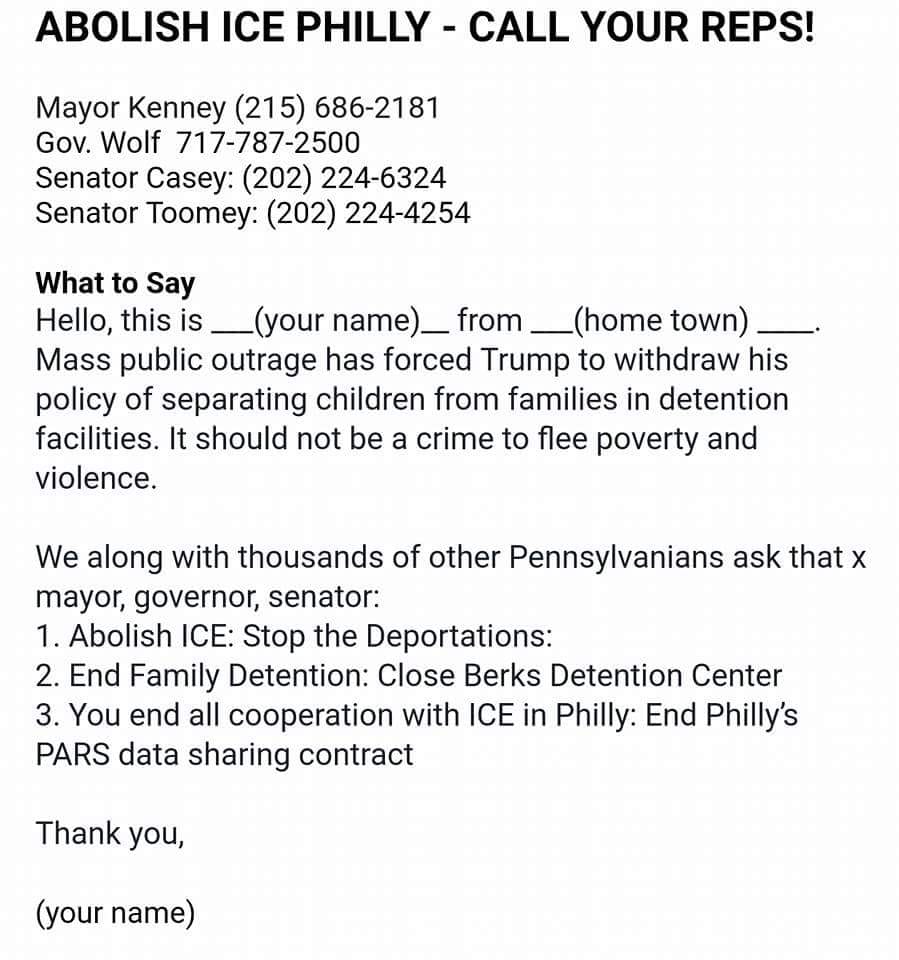 The new camp continues with 70 or so on the ground, who remain chanting, picketing, actively feeding all who pass by the very centrally-located camp, hosting discussions and communal meals.

Today the Mayor addressed this new camp, expressing concern that the camp may become “unsanitary and unhealthy and unsafe environment” but that it can remain as long as it does not become a “permanent encampment” with things like tents and generators. He said he has not come to the decision yet on whether or not he will renew the PARS contract.

It has been a long week for occupiers. Flash floods, police brutality, and a heat wave. The total number of arrests were around 40 or so, which included Friendly Fire comrades, both of which clung onto their rosaries in prayer as it occurred. The police responded by bashing one comrade’s head into the van, tearing the rosary out of her hand, and then stomping on it in front of her. This was after an already brutal beating. After being released within a few hours with a citation, she returned to camp, ready to continue holding ground.

Friendly Fire has held small prayer meetings throughout the week at the occupation, including a tent meeting and an exorcism of the ICE building. We are all committed to the efforts at the new camp.

We have been blown away by how the Left came together for #OccupyICEPHL and we are hopeful that we will continue building coalitions, working alongside together, even with our various tendencies and tactics. To tackle the monster that is ICE, and dare I say the police, we have no choice but a diversity of tactics.

One thought on “#OccupyICEPHL camp destroyed, a new one begins at City Hall, & other updates from Friendly Fire”